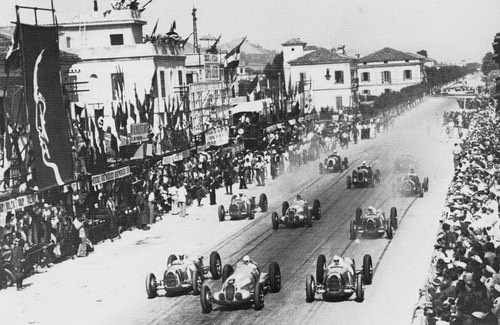 The Campus takes its name from the road that had been the historical “Circuit of Pescara”: a car racetrack that hosted the “Gran Prix” of Pescara from 1924 to 1961, also known as Coppa Acerbo, from the name of the fascist official from Pescara who conceived it.

In 1957 the circuit was used as a racetrack valid for the Formula 1 world championship, marking a record: it was the longest racetrack ever in Formula 1, with its 25,579 km.
Via del Circuito, particularly, was the road that made the racers turn towards the inland, leading them to Villa Raspa and Spoltore, then it went further towards Montesilvano before descending back down to Pescara.

The unforgettable Enzo Ferrari (to whom the road connecting via del Circuito to the the Central Station is dedicated) left a touching memory about this racetrack:

“The circuit of Pescara was one of the first examples of perfect organization. With its drops, the several fast curves getting to Spoltore, it represented an ideal testing ground for the emerging Italian car industry. And I must add that the shores of Pescara, the warm hospitality of its people and their benevolent applause will stay with me as an everlasting memory”.